21 OctGreat Company Culture: Not Just For Big Companies Like Google! 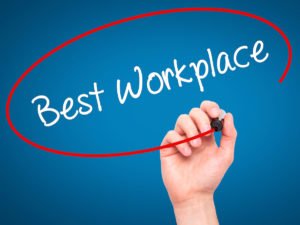 Laszlo Bock, head of People Operations at Google, recently wrote a book called Work Rules!. It is an insightful look into what Google has done to bring a culture of high freedom and creativity. A particular distinction he makes regards differences between treating employees like machines verses owners. Machines do their jobs; owners do whatever is needed to make their companies and teams successful. For Google, it has worked quite well to create a culture of high freedom and creativity treating employees like owners. Google’s culture is not the only large organization in the news. We have also seen a lot of press lately on the cultures of other large organizations like Zappos, Apple, Facebook and Amazon.

The question then becomes whether small and medium sized business can create conscious culture™s that effectively execute and provide a great place to work. The answer is absolutely yes. It becomes clear when reading Laszlo’s book and from my own experiences, the most impactful things we can do to move the culture needle forward does not cost much money at all. It is not about the free lunch, massages or dry cleaning, although those things do give employees a good feeling. It is about the values, leadership and supporting systems that allow an organization to be unique and powerful on its own.

When I joined Bridge Bank as the Senior Vice President, Human Resources Director, the staff grew 40% to 260 employees. I was hired in part because most of my thirty plus years in Human Resources were outside of financial services. I worked in industries such as auto manufacturing (NUMMI), high tech (Texas Instruments), action sports (O’Neill) as well as others. Bridge Bank leadership was interested in progressive ideas that banking had not thought about or seen.

Impacting and moving the “culture needle” forward was a priority for me in this role. The culture survey results in 2010 were 2.67 on a scale that went from -6.0 (low unsatisfied) to +6.0 (high satisfied). It was good and there was room to improve. Two years later, after implementing actions based on the 2010 results, the score went up slightly to 2.89. It was progress but not the progress I had hoped for. At least the needle was moving in the right direction. Many actions were put in place in 2012 and 2013 so that we could continue to make greater improvements in our culture. Inf 2014, the score went up significantly to 3.46. That felt good. In 2013 we were awarded the Top Place to Work For in the Bay Area (Silicon Valley) by placing 14th in the mid sized companies. The recognition felt good particularly given the competitive arena of Silicon Valley. In 2014 Bridge Bank made the list of top 40 Best Banks to Work For in the United States. This was a great national honor since there are over 6,800 banks in the US. It is important to note that it does take time to create improvements in culture. It is a journey that gets better over time with conscious attention.

How can small or medium-sized organizations understand and improve their culture? What were those actions? Do they need free lunches and massages to make this kind of great progress? The free lunch is not the answer. Here are some key actions that any size of organization can implement in order to make a difference and bring consciousness to their culture:

Begin With A Benchmark

The place to start is with a benchmark. Objective measurements and assessments of the current state of culture are needed. Clear indicators of the strengths and weaknesses of the culture can be objectively defined in culture surveys. There are many surveys to choose from. Some are customized and others are part of a package. Questions can be rated and/or open ended. I recommend using culture surveys that have both rated and open-ended questions and that you customize the questions to meet the needs of your organization. Give great thought on what you want to measure because this same measurement needs to occur on a regular basis. If culture surveys are new to your organization, then conducting culture surveys twice a year makes the most sense.

Creating a culture group from different levels and locations that assess the results is the next step. A culture group not only examines the numbers and analytics of the results, but can also help fill in what is not clearly stated in the survey data. This “cooler talk” knowledge is priceless since this really gets at the important issues that need to be surfaced. It is the information hidden in the numbers.

It is important to spend time on determining the values of the organization. Bridge Bank initially had eight values in place from the early years of the company. The challenge we faced is that employees were not able to remember or relate to them. The values did not apply to everyday business. We took the time needed to gather input from different levels and, after much discussion and reflection, three values were chosen. We wanted each value expressed with no more than two words. The final three values were: Earn trust, Take ownership and Exceed expectations. The real test to their significance was the reaction from employees after the rollout. Often the comments were something like, “Yes that makes sense.” “It could not have been hard to come up with them.” Perfect. We succeeded in truly defining who we were and what the values of the organization were.

Another action implemented in creating a conscious culture™ was to implement leadership training at multiple levels. We offered a manager training track as part of Bridge Bank University (BBU).   Often the weakest culture link occurs with first line managers. Too often managers are promoted from technical experts to managing others without assistance in effectively managing staff. It is presumed that because they were promoted they would effectively provide employees with feedback and motivation, understand how different generations prefer to be managed, know how to interview and hire employees along with other learned managerial skill sets. Skill development needs were identified in part from the culture survey and those manager courses were put into place. This made significant differences in the competencies of managers and the job satisfaction of their direct reports.

A Leadership Journey program focused on higher-level leaders was also added. The year and a half program gave senior managers opportunities to learn and grow together on leadership specified competencies. Toward the end of the journey, the participants divided into teams and each worked on a project that was intended to impact the organization for many years. This is where the rubber met the road and the real learning occurred for these leaders. Significant game changing accomplishments came out of those projects.

The Importance Of Exit Interviews

An action that I think is important and often overlooked for its true significance in culture assessment is exit interviews. Too often they are conducted in a short period of time or by electronic survey and only get at the surface. Human Resources departments must ensure they create a safe space and build trust with employees so that employees know the intent of the exit conversations – making improvements to the culture. Effective exits can last 45 minutes and sometimes an hour. If employees believe the intent is sincere, they will tell the truth, both about what is working and what is not working. You know you have succeeded when the C level and managers want to learn from what employees have shared in the exit conversations. It is a critical way to check in on the culture and fine-tune both what is successful and also needs further attention.

All of the above strategies and actions speak to the culture assessments and actions within the organization. To speak to the outside world (applicants), an employment brand was built. This included a video on our website that described the culture from the employee’s perspective. Job descriptions were friendlier and spoke more to who the Bank was rather than the details of the tasks that needed to be completed. The organization had the goal of feeling more human and personal to applicants. An effective employment brand tells the story of what it is like to be an employee at your organization. It is often spoken from the employee’s perspective using video and quotes to get at the essence of the organization. If done well, an effective employment brand attracts the right fit of applicants, reduces your time to hire and reduces turnover due to fit.

Can small and medium sized companies move the needle on culture? Absolutely. It takes intent and desire to listen to the voices of employees to create a conscious culture™. What I have shared is a range of methods to create a more effective culture. Organizations do not need to implement all of these items. The place to start is the culture survey since this gives you the “truth” on what is going on. It is the role of Human Resources and the C level to take the lead on building effective cultures, no matter the size of the organization. To quote James Haskett of the Harvard Business School, “A strong culture can help or hurt performance. Culture can account for up to half of the difference in operating profit between two organizations in the same business. Shaping a culture is one of the leader’s most important jobs; it can be ignored but only for so long and at one’s peril”*.